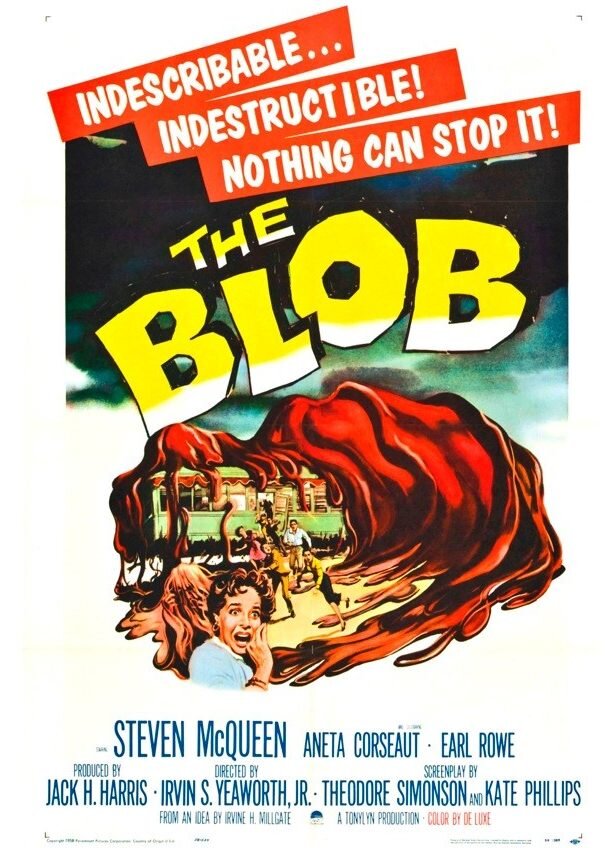 Synopsis: Indescribable…Indestructible! Nothing Can Stop It! When teenagers Steve Andrews (Steve McQueen) and Jane Martin (Aneta Corseaut) notice a shooting star blaze overhead and land on a nearby hillside, they hop into Steve’s car to see where it landed. When they arrive at the scene, they find an old man, holding his arm, writhing on the ground in the middle of the road. He is in so much pain that he is unable to speak. The man’s hand is covered by a gelatinous substance that seems to be spreading up his arm. They drive him to the town doctor, who tells the teens to go back to where they found the old man to see if there is anything at the scene that could shed some light on the problem. When Steve and Jane return to the doctor’s house, Steve peers through the window of the darkened home in time to catch a glimpse of some horribly violent and indescribable attack on the doctor. Indeed, it’s like nothing he has ever seen before. Steve rushes to the police, but the officers turn a deaf ear, thinking they are just teenage pranksters. Faced with the frustrating reality that no adult in the town believes their desperate warnings that all their lives are at stake, Steve and Jane seek out their friends to help them spread the word. They find their buddies at the local movie house and successfully coax them out of the show shortly before there is a mass stampede of terrified movie-goers hysterically running out of the theater. Fleeing for their lives in a panic, with the now massive red menace following closely behind, snapping up bodies by the dozens, the townsfolk of all ages finally believe Steve’s warning. This gelatinous alien from another planet has easily adjusted to its new home on earth, and seems to love all humans—in fact, they make quite a tasty treat—and it’s not worried about its waistline…it doesn’t have one. With every human morsel it devours, it grows larger, redder, and more aggressive. When every weapon that is used to stop it in its tracks fails, the town, perhaps all of humanity seems doomed. It was a good thing actor McQueen was so cooool…he comes up with a solution that will put the Blob on ice for eternity, maybe…unless, of course, there’s a possibility for a sequel!