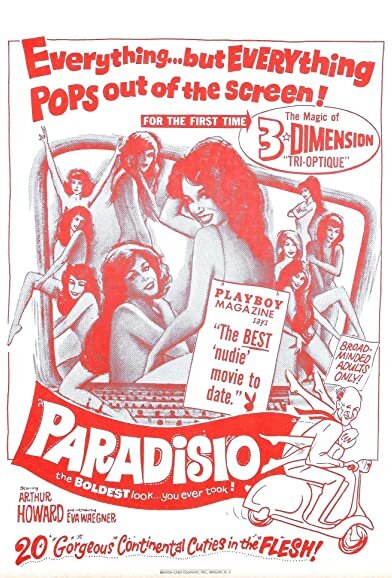 Synopsis:  With a tagline like “He Looks Through Glasses and Sees Bare Asses – in 3D!” how could Paradisio not be considered a comedy, albeit a sexy one?  In London, Professor Sims receives a pair of special sunglasses with a note from an Austrian friend, asking him to deliver the glasses to Munich. Only too happy to oblige, Sims heads for Germany. When he hits a sunny spot on his travels, Sims pops the glasses on and, to his utter surprise, he happily discovers that they’re x-ray spectacles, enabling him to see through people’s clothes. As he travels through Europe on his way to Munich, he is pursued by a sexationally, seductive spy, who will stop at nothing to get possession of the glasses. Making his way through the cities of Europe -- from Paris to Venice and on to Munich -- Sims stumbles over several dead bodies and lots of unexpected intrigue. Finally, after delivering the glasses to the intended recipient, Sims gets the last laugh as he beats a hasty retreat to the Riviera with the special specs in hand, where he lives happily and salaciously ever after!